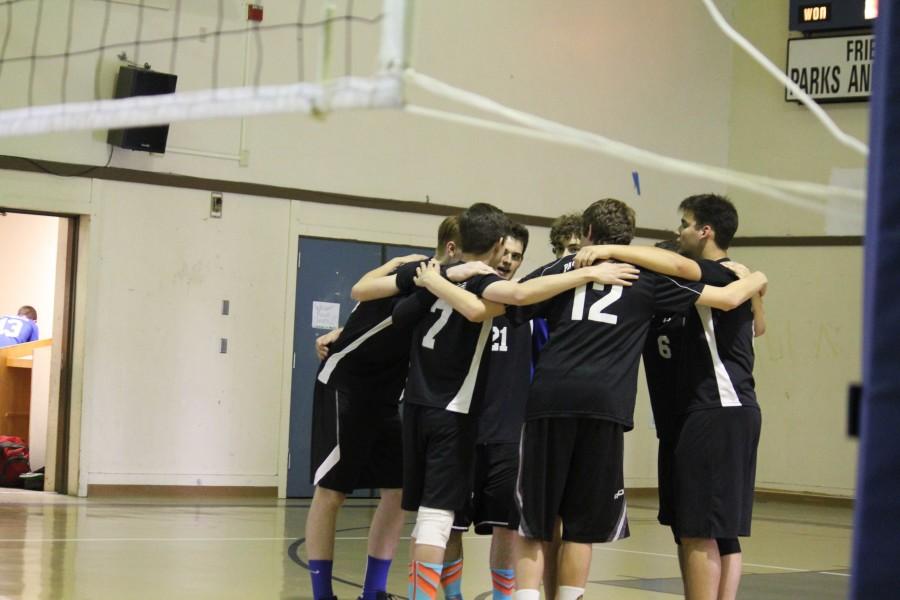 The PCS boys’ volleyball team overwhelmingly defeated the Scotts Valley Falcons on Tuesday, March 17, in a three-set match. The four seniors — Cole Margerum, Zach Fishman, Owen Hedrick, and Christian Bouchard can all be identified by their technicolor Kobe 8 sneakers and matching socks. What most stood out, however, may have been the familiar face on the opposing side of the court–former PCS student Erik Bullard, who managed to trip up PCS a couple times on long serving runs.

PCS started off strong in the first set and successfully maintained a lead for the entirety of the game. Although Scotts Valley’s defense was scrappy, PCS’s offense proved to be undiggable. With a score of 22:11, coach Harlina Manley subbed out a couple of her starters to give the bench a chance to shine. After losing a point, PCS gained sideout and Margerum served a floater that made the crowd gasp, but Scotts Valley returned it and freshman Philip Grote finished the rally with a massive kill from the center of the net. PCS won the first game with a score of 25:15.

In the second set, PCS maintained a solid lead above Scotts Valley. Grote earned several kills and Fishman continually tooled the block for a total of twelve kills within the match. Margerum wowed the crowd with several great digs and serve-receive passes and Bouchard tooled the block with a clever tip. Perhaps the most memorable moment of the match occurred when sophomore Alex Radovan went up to serve and just before he tossed the ball into the air, freshman Andrew Carter called out “Alex no! Alex no!”. The ref called a turnover due to PCS being out of rotation — Alex was not supposed to be serving. This induced a timeout and a collection of volleyball players gathering around, echoing the phrase “Alex no!”. At 24 to 13, Scotts Valley earned a few points on a strong server, inducing some passing errors. PCS managed to finish the match with a score of 25 to 16.

In the final set, PCS began its first game down two points and became a bit frantic — rushing sets and fumbling passes. They then regained their momentum and tied up the game at 4 to 4. In this game, the score remained close but their out of system plays were inspiring, with Bouchard stepping in to set his teammates, setter Owen Hedrick sliding across the floor with incredible digs, and the crowd filling the gym with resounding “Ohhhhh”s and “Yeahhhhh”s. At 24 to 22, Hedrick, a senior, passed a short serve and Fishman finalized the game with a kill reminiscent of a butcher swinging a meat cleaver.