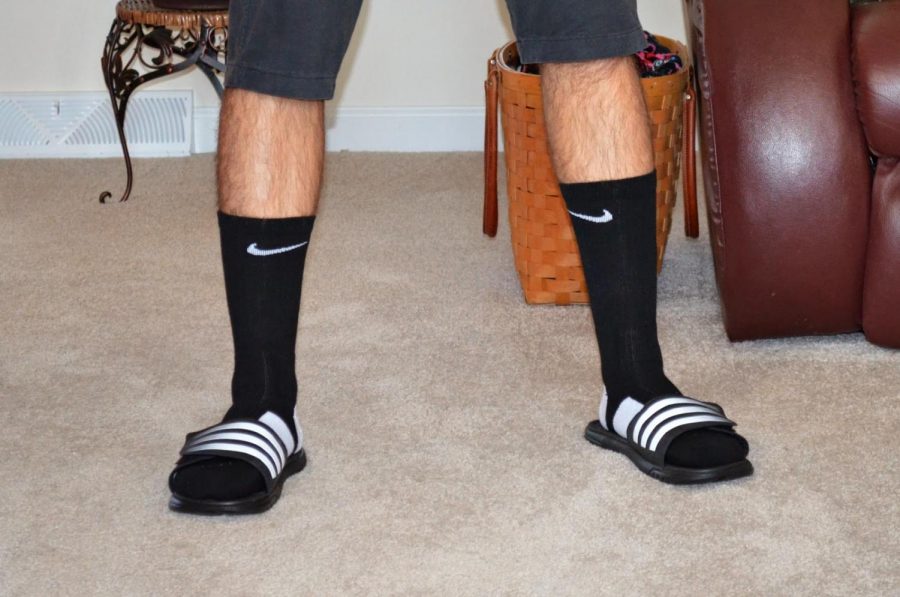 Every year, Halloween is a time when people can express their true creative interests through costumes. Peculiar fashion statements such as capes, wings, and even socks and sandals can be present in the Halloween scene. That is right, socks and sandals (*hurl*). For those who are unaware of what socks and sandals are, they can be characterized as the worst so-called fashion statement ever constructed, and have been haunting us for 2,000 years, as the earliest socks and sandals were worn by the Romans.
Unfortunately, the presence of socks and sandals in mainstream media has become increasingly popular, and not just during Halloween (as if the presence of socks and sandals was not scary enough). American youth have been corrupted by Disney Channel’s hit 2011 television show, So Random, as the program aired a song featuring teens singing, dancing, and most despicably: encouraging the usage of socks and sandals by chanting inappropriate lyrics such as “Cause I’m bringing back socks and sandals” and “When a [girl] asks for your digits, she means your toes!”. Celebrities such as Rita Ora, the Olsen twins, Chloe Sevigny, and a mysterious elderly man on Wikipedia’s infamous “Socks and Sandals” articles have expressed interest in the “fashion statement”. Even a local 10th-grade PCS celebrity, Alok Shah (a.k.a. “Crisp & Clear”), a renowned singer-dancer is unfortunately a strong proponent for socks and sandals, which seems to be more of a rising cult than a fashion statement. Shah views the socks and sandals cult as “the only way [he] can find to truly express [his] personality and outlook on the world” and that they are his “whole life”. Although being able to express one’s personality is a positive trait, socks and sandals are not.
In the fifth grade, I wrote a persuasive essay one why socks and sandals should be abolished, and my top reasons still stand: Socks and sandals are expensive and dangerous. The significance of wearing sandals is to allow one’s feet to breathe, usually on a warmer day, as one does not usually don sandals in the snow (if so, that seems to be a major problem). Thus, wearing socks while donning sandals in completely illogical. A socks and sandals wearer is taking two articles of clothing: socks, and sandals, which serve opposite purposes (the former is for containing the foot’s heat, the latter for letting the foot breathe) and trying to make sense of the combination altogether. Wearing socks with sandals is ridiculously as equivalent to wearing a winter coat while fanning one’s self in 120 degree Fahrenheit weather, sleeping with one’s eyes open, or wearing animal furs while preaching veganism. Opposites in this situation do not attract, and additionally, do not attract people’s attention in a positive manner, as the So Random song wrongly suggests. Furthermore, sandals are already an expensive purchase, ranging from $0.01 on Amazon, to $1000 on the Louis Vuitton website. Thus, adding socks to the atrocious hodgepodge, which can cost up to $1,188 per pair (if you purchase for the German company, Falke, a very affordable line) is only increasing the already-skyrocketing expenses of wearing sandals. Besides being quite expensive for the average American, socks and sandals are also quite dangerous for a wearer. Although wearing sandals barefooted (the correct way) will result in one’s foot appearing more sweaty than a sock wearer, there is a large force of friction between one’s foot sole and sandal. In comparison wearing socks and sandals, allows for more movement of the foot, which could be dangerous. This could result in accidents such as falling in the rain or mud, which will result in dirty socks, a stumble on a staircase, or letting one’s foot loose of the gas pedal in the car, making it impossible to “kick [a socks and sandals “hater”] in the shin” as the So Random song instructs.
Even though, the socks and sandals cult may be gaining popularity at an extreme rate, change can still occur. If you are aware of people who are beginning to express interest in the socks and sandals “trend”, I highly suggest that you converse with them, first letting them talk about their true feelings regarding the “trend”, and later reverting to educate them about socks and sandals’ true dangers. It is vital that you support your socks and sandals loving friend through this difficult journey.
It may be a bumpy ride.