How to Zoom Through A Tedious School Day 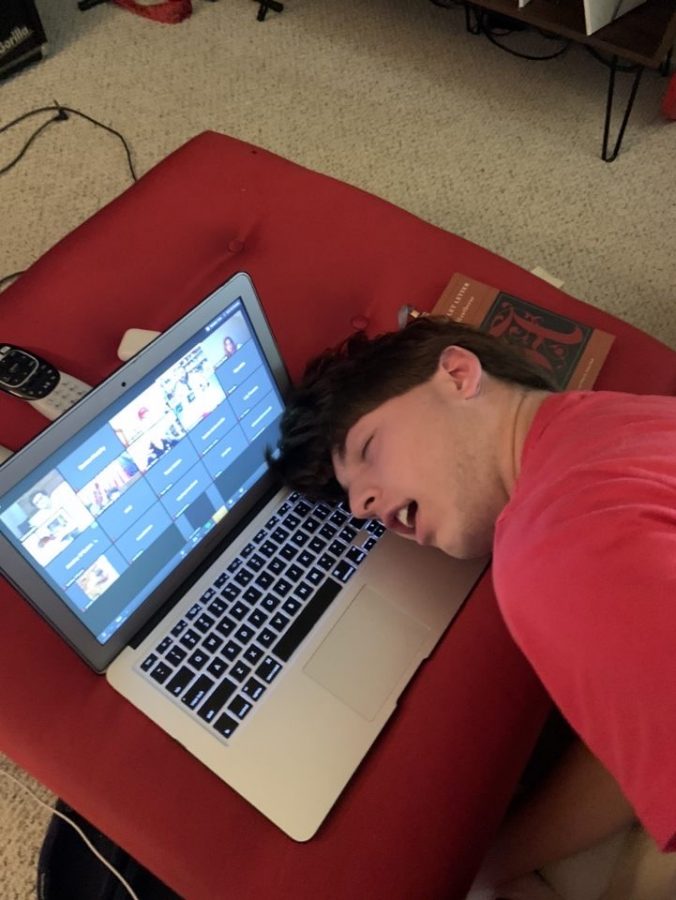 Every morning, make sure to sleep in until 9:59. Stay in bed and join zoom from your phone. Then, after attendance, turn off your wifi. This freezes your screen. “If you don’t have the internet, then, logically, you can’t participate in class.” Now you can keep sleeping. Don’t worry about missing class. All of the tests are open notes.

When the first period ends, get out of bed. Now you have fifteen minutes to prepare for the 2nd period. Make pop tarts for breakfast and stay in your PJ’s. Put a fuzzy blanket in the towel heater. Bring it to the couch with a cup of coffee. Now that you’re nice and cozy, join your next class. Tell your teacher that your camera is not working (remember not to call Ms. Daniels so her time isn’t wasted((;). Then, eat breakfast, and do your homework from the first period. When class ends, eat lunch (second breakfast because you slept in). Make something easy like “Annie’s Mac ‘N Cheese.” After finishing your lunch, you now have more time to nap. If you’re weird and feel guilty for sleeping, go get your math homework. Use your phone as a calculator, but check Tik Tok after you look at the first problem.

(remember not to charge your phone so that you can’t get distracted doing homework later) Now you can relax. You were productive during lunch! After all, considering starting and assignment is the first step in completing it((;

When it is time for your third class, you now have two options:

If it is hot outside, work while sitting in the pool. Set your assignments on the edge, but be careful not to get them wet.
If it is a cold day, or you feel tired put your blanket in the towel heater again. Take it to the couch. Get cozy but try not to fall asleep.

When class starts, don’t pay attention! Most teachers take 5 minutes to say what a Barron’s book says in three sentences. Instead, do your homework from the 2nd period.

Once school ends, it’s party time. You still have one assignment left, but “screw it for now.” There is plenty of time later.”

After dinner, go to your room and check Canvas. Do your homework from the 3rd period. Once it’s done, do your unfinished standards quiz. Watch a Youtube tutorial, and then click on the recommended recipe for “Japanese Jiggly Cake.” After it finishes, watch the next video about “eating 15 Happy Meals in 10 minutes.”

“Yikes!!!” Now it’s time to realize that you wasted an hour.. Stop getting distracted, and rewatch the tutorial video because you forgot it.

Now you are ready to actually start the quiz. Take out your phone calculator, but realize you did not charge your phone. Go to the kitchen to “borrow” your brother’s charger. While you’re there, eat a bowl of Cinnamon Toast Crunch. Eating is the best form of procrastination. Technically it is productive because it fuels your brain.

Once you’re done, leave your bowl in the sink (it’s your brother’s night to do the dishes and afterall, you’re being productive, right?). Go back to your room and charge your phone. Open your calculator. Start typing in the first equation, then stop. Click on the snap notification that just popped up. “It will only take a minute.”

Now that you have socialized, get back to work. Going to bed early is important so you have a strong sleep schedule. Do your math quiz. After you submit it, check your canvas to do list. When you see that you did not do your in class assignments today: freak out!! Startdoingthemimmediatelybecausetheyaredueat11:59 pm.

Once you’ve had a solid break, check tomorrow’s agenda on Canvas. Complete the in-class assignments now, so that you are free to do other stuff. Just remember not to submit them until after class**

Finally, you are done!! Good thing you are too, because it is 2:13 am. In order to function, you need 10+hours of sleep.